If you're liable for higher rate tax of 45%, give Fiona Wills a call for personal, business or corporation tax advice.
Posted by Unknown at 08:37 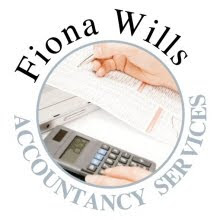